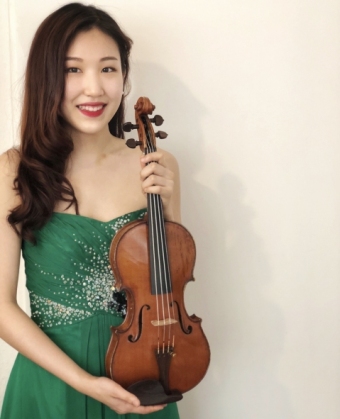 Korean violinist Jeehoon Park was born in 1996 in South Korea. She started to learn piano when she was four years old and also took up violin at the age of six. At the age of ten, she moved to England.

In England, she studied at the Purcell School of Music with a scholarship "UK's Government's Music and Dance Scheme". During this time in England, she had the opportunity to play in the most famous concerts halls. She played numerous solo concerts at St. Martins's-in-the-fields, Warwich University Art Centre and St. Alban's Cathedral and many Chamber- and Orchestra Concerts at the London Southbank Centre's Royal Festival Hall, Queen Elisabeth Hall, Sage Gatehead in New Castle, Watford Colosseum. etc.

She also organised a Music Outreach Project in South Korea. This programme was about her impulse team at the Purcell School visiting her home country for a week and going to many places where people do not easily receive classical music such as orphanages, care homes, hospitals and multicultural centre etc to teach them, have workshops and give concerts (Solo Recital in Seoul Hanjeon Art Centre and Pangyo Catholic Church).